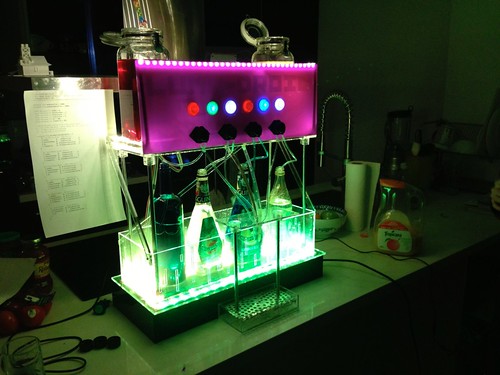 Several months ago, my friends and I built a bar-bot, a machine for serving alcoholic drinks.  The original motivation was a Robot Birthday party at my house; traditionally we have a theme drink for each party, but it turns out there really are not any "robot drinks" (bender not withstanding).  So the obvious step was a make a robot make the drinks :-).  I've wanted to make such a machine anyway since attending a barbot party in San Francisco about 5 years ago, at which about a dozen such machines were exhibited.  After looking into how expensive various components would be, I settled on using 12V peristaltic pumps used for aquarium dosing, because they are both cheap and food safe.  The biggest downside was slow - they pump about 80ml/min (don't believe 100ml/min claim), so realistically it's about 25 seconds/ounce.  That suffices for the booze, but for mixers I needed a higher flow rate, so I found a cheap way to make a valve (basically just using a servo motor to crimp close some tubing), and just gravity to drive the flow.  A friend of mine did all the design for the laser cut boxes, another did the coding, and a third helped me with assembly.  I did all the electronics design and the project management, plus all the actual buying of things (we love you plastic world and creatron).  It was super huge amounts of fun, and I've used it at three parties now, each time it was a smash hit.  The lighting (we used fully controllable RGB LED strip - the expensive stuff) is spectacular, that's why we called it the Luma Droid!   All told, the machine cost $470 in parts, took 71 hours of my time, and about 60 hours of my friends time.  So I estimate time payback (assuming 30 seconds of saved time per drink made) in about a millennium :-).    Financial payback, however, may take slightly less long - I've just been offered quite a bit of money to improve the machine (in whatever ways I want) and bring it to a very swanky party for a top-tier alcohol brand.  So that's exciting!  Check out the Luma Droid photo gallery.   Here's a video of Luma Droid in operation at the birthday party: 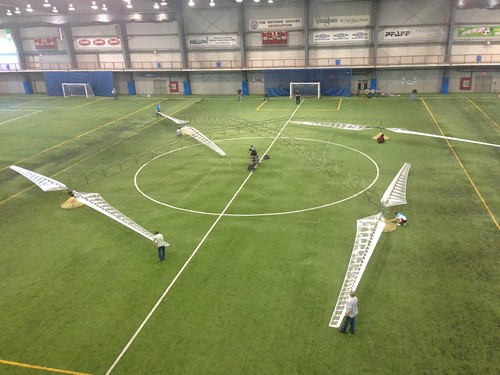 I was super privileged to be allowed to observe the aerovelo team as they broke the world records for human powered helicopter flight (duration this time, they broke height a few months before this).  It occurred back in September, just after the Toronto Mini Maker Faire, in an indoor soccer field about a half hour north of downtown Toronto.  You can watch spectacular videos on their website of the machine in operation, but it's hard to tell from those videos just how fragile the whole thing is!  It weighs considerably less than a human - if memory serves, something like 90lbs.  This was vividly brought home once when a rider slipped on the pedal (fortunately before liftoff!), and the entire machine shook - it became very clear that one wrong move by the rider could actually destroy the thing.  And what a thing it is - super beautiful!  A marvel of engineering and craftsmanship, using space age materials.  For these duration flights, their actual limiting factor wasn't how much work it is (though I do believe you have to peddle harder than most people would be capable of), but a technical limitation in the machine: the ropes from the copters to the central bike are unidirectional, i.e. they are of finite length, and you simply pull them from one spool to another.  Once the rope length is exhausted, it's done, you can't fly anymore.  The main reason they did this is weight savings - the extra rope to double it back, and the hardware necessary to tension it in that case (against the flex of the machine, which is quite large!) vastly outweigh the unidirectional coil.  And that machine is all about weight vs lift!  Anyway, it was an amazing experience to watch a human fly like that, the machine is actually quite quiet, and very elegant, they are off the ground before you realize what's happening.  The level of design engineering they did is also incredible - apparently everything was modeled long before they built it, but even so there was a lot of variables they were swapping around in the actual machine, for instance, the type of rope between the bike and the copters.  I heard they actually repeated the flights the next day, using a different, much longer, stretchy rope, hoping to set a much higher record, but apparently that rope was a total bust - they couldn't get off the ground!  Another interesting fact is that if the rider stops peddling, the machine immediately falls to the ground - there is zero momentum, because the mass is so low.  There was also a lot of fussing about balance - there is no mechanism to control the relative speeds of the four copters, so the only control of movement/drift is by the biker shifting their own weight.  And of course the machine is bound by the soccer field, which as you can see from my photos, isn't a lot larger than the machine, so drift actually ends a lot of flights.