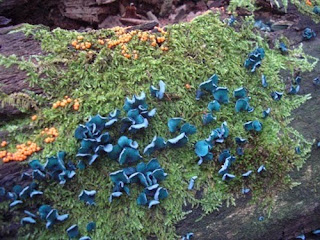 Last weekend I attended my dad's 21st Annual Rocklyn Creek Mushroom Forey, which was a total blast. Last year I had to fly 7000 miles round-trip to do the same (as part of a vacation trip), this year it was a mere 3 hour drive :-). We had a good group of people, I think 11 on the hike itself and a few more people for the tasting and potluck dinner. Dad claims that we had one of the biggest years ever in terms of mushrooms, with about 70 different species being identified, including almost 20 edible ones. We certainly had more than we could eat, anyway! I had fun playing photographer, seeing as I was the only one who brought a camera. You can check out my Mushroom Forey Flickr Set 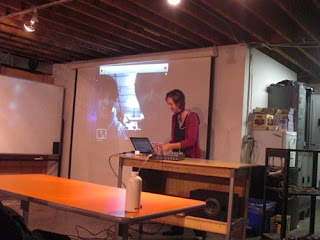 I gave a (last minute) talk at the Toronto Wearables Meetup #4, there were about 20 people in attendance, which is an awesome crowd! My talk was well received and I got some interesting questions, specifically one about the open hardware movement. Sparkfun has done so much to make the open hardware movement easier, but we're still a long way from having the kind of ecosystem that free software has. Part of it is that the very nature of hardware design makes it harder to share and collaborate - a design and layout is much more monolithic than software is generally - small changes can break the layout, and then hours of work must be put into redesigning it.

But, on the wearables front, this meetup was hugely exciting. Turns out there is a new undergrad program (a minor) opening in Toronto only a few blocks from where I live: OCAD Wearable Technology Minor. There is a lot of material at that link, which I am still absorbing, but they have at least four "pathways", sets of recommended courses from the broader list that you can take. Fascinating stuff, I plan to go get a tour and talk to the Prof's. A couple of the students in the program were at the meetup; I'm sure it'll be a regular required event for them! One of the Prof's is Kate (pictured), who helps organize the meetup.

The #5 meetup is already planned and Sean Montgomery (of Produce Consume Robot, Vital Threads) is giving the talk. I'm really looking forward to this one, Sean and I have exchanged some emails about the pulse choker project and I'm keen to see his heart shirt. So all my friends back in SF are actually at Burning Man right now, the man's embers are probably cooling as I write this. I would have loved to be there, but I chose months ago a plan that I knew would result in me not being there. Twice in a row is enough, it was time for a year off anyway.

A friend of mine apparently made the same choice this year, even though he's in SF: he stayed home and looked for other things to do. And that apparently included Balsa Man, the 1/16 scale version of burning man. The Balsa Man is 3 feet tall, the gathering lasts only a few hours, the art is tiny, and the art grants are even tinier! Check out his two posts: Come to Balsa Man, the 1/16 scale version of Burning Man and Balsa Man projects complete!. Also, check out Karen's flickr set of Balsa Man 2010.

I just love the whole idea of a tiny burning man, pure genius I tell you! And it looks like they got ~200 people in attendance, also pretty close to 1/16! I've settled down again! I just rented a room in Kensington Market, a hip shopping area in Toronto, Ontario Canada. My room is immediately beneath the big "LSD!!!!" graffiti :-). Yesterday I bought some good sharp cheddar at the cheese shop, some salami at the meat market, and an awesome loaf of bread at the baker: all the makings of a great sandwich. Those who know me well know how much I love sandwiches! I'm also about a 45 second walk from hacklab.to, one of the hackerspaces here in Toronto. My room actually has a view of the CN tower! I'm looking forward to settling in and getting to know the area. I plan to print out a huge map of the area and pencil on all of the nearby restaurants and shops, then check them off one at a time as I visit them :-).

Coming soon: I will blog about my trip to Ireland. I visited two hackerspaces, TOG and 091Labs. So I am super lazy, sorry about this being over a month late. I visited Quartz Lab on July 27th, 2010, for their Tuesday Open Night (TON). Flickr Set. I had a blast and made an impromptu talk about North Paw (no presentation, just off the cuff). There were two guys there who were the official speakers, they had built a Dr. Who Dalek, totally awesome!!!1!!1!1!! Apparently there is a UK group of people who have published all kinds of info about how to do this yourself, and they followed those plans. But they added a powered wheel chair inside, so that you can drive the Dalek around, which is awesome. You can see both the Dalek talk and my sensebridge talk.

Anyway, Quartz Lab has a great space, they have several thousand square feet, divided into three major areas. Just inside the door there is a nice couch area, to the right there is a great class room space, and then most recently to the left they have rented a new area which is going to be the workshop - drill presses, etc. The night I was there they had about 50 people in the space, and even when we all crowded into the classroom for the talks there was still tons of space. I also got a very warm welcome from Darin White, who I had previously given a warm welcome to Noisebridge when he visited San Francisco. I really like Quartz Lab, I'll probably be heading over once or twice a month for their TON events, anytime they promise an interesting speaker...

They also did something really awesome with one of their walls: they made it into a rotating art wall. Various artists are invited to show off their works. I think it's a wonderful way to get some awesome stuff for the walls while also exposing local artists, and incidentally spreading the word about the hackerspace into the artist community... Shear genius, I tell you!