I got my flickr account back to working again. I never used it beyond my 2007 China Trip, so there really isn't much there yet, but I think you'll all be excited to see Portland Day 1: Brain Silo & Free Geek.

We did see Brain Silo yesterday as well - thanks to the kindness of Nick, who gave us the code for the door without even being there himself! We explored the space on our own. I'm hoping to get a proper tour and meet some peeps at Brain Silo today, we'll see what happens. But I can say that they have a very industrial space, with the main door being a garage door! And it looks like they do some electronics, I spotted lots of wire, a soldering iron, etc. I left them a few surprises, let's just say that noisebridge has left its mark :-). 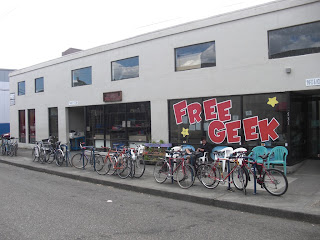 Today I toured Free Geek, an awesome computer re-habilitation and recycling center here in Portland that has spawned other centers in many cities. It's an amazing facility. They use mostly volunteer labour to process incoming donations, keeping the best parts in order to make computers. They then install Ubuntu linux on the computers and donate them to their volunteers and the community at large. And they run educational classes to teach people how to do all of this and how to use the computers. 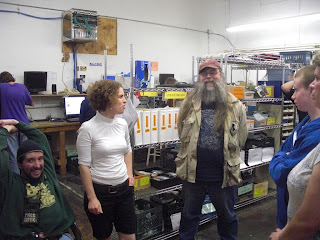 The place is clearly a geek heaven - there are countless pieces of geek art, tiny little geeky jokes all over the walls, and more computer parts than you can shake a stick at. Our tour guides were awesome and very forgiving of our need to check out all the little details. The tour is actually organized in order to orient new volunteers to the layout and how the place works, so we totally crashed that party, but they liked us anyway :-). They even have a museum of very old computers, including an Apple IIe, a NEXT box, an Altair 8000b, and numerous other famous computers. I highly recommend touring Free Geek, it's an awesome place and we need way more of them - they are doing great stuff. 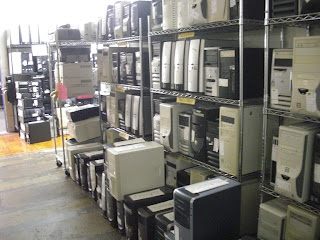 I'm going to try to resurrect my flickr account tomorrow, so you can see all the art, but for now you'll just have to stick with these three images, showing the outside, our tour guides, and some of the rehabilitated computers just prior to donation. 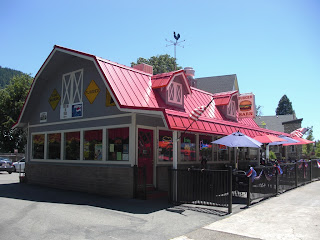 I arrived in Portland last night at around 8pm, much earlier than I had anticipated. I made great time from SF to here, only 11h including a stop at burger barn (pictured, they sell a 1lb $20 hamburger!) for lunch. It was in a really cute mountain town somewhere just south of the border between California and Oregon. My craigslist rider was super awesome & chill, she controlled the sound system and we listened to This American Life, the Moth, Escape Pod and some music. I'm staying now with friends here in Portland, it's a great neighborhood. They fed me kraft dinner, which was awesome, some of my best childhood memories are of eating that stuff! I'm planning to visit Brain Silo today and the science museum OMSI "after dark" tomorrow. Also on the list is Free Geek. 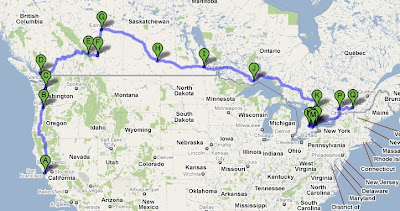 I've made a huge map of the trip. The part up to Novar (letter K) is gonna happen immediately over the next three weeks. Beyond that my plans are less definite, but I will be visiting the rest of this itinerary at some point :-). Check out the google map for yourself. 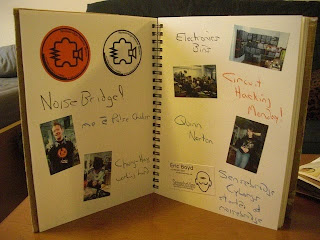 Let it begin! I found home and happiness in San Francisco, for the first time in my life. I could find a way to stay, but instead I choose adventure.

Present plans: hackerspaces road trip! Head up the coast from San Francisco to Portland & Seattle. Then cross over into Canada and see Vancouver, Victoria, Banff, Calgary, Edmonton, and then drive across the prairies to my family's cottage near Huntsville, Ontario. By my count, there are 5 hackerspaces along the way, plus four more in Ontario itself. With the two I have already visited (noisebridge & hackerdojo), that brings the total to 11! I'll be blogging and scrap-booking my experiences as I go.

After the road trip, some time with my family. Then, I'll probably be off to Europe. Stay tuned. Also, this post is in no way associated with Flat Eric's Adventure.