For Halloween this year I actually completed a long-term idea of mine: an epic illuminated acrylic staff. You can see the full costume to the right, or check out the entire Halloween Flickr Set. I partied on the Jubilee Queen, a medium sized cruise boat (held perhaps 150 people?), there were lots of people with excellent costumes on board. Much to my surprise, I actually won the "best male costume" award, which consisted of an enormous beer stein and a coupon for a free cruise with the same company at any time in the next year. Awesome! I've only ever won something once before, so this was pretty novel for me! Anyway, my favorite other costumes of the night: Devil Dude, the Egyptian couple, my co-winner the Bride of Frankenstein, the fifth-element girl (in body suit), Red Riding Hood, Shrek (though he missed the horns!), and of course the requisite french maid outfit :-).

Details on my staff: I bought the 1 1/4" solid acrylic 6' rod at Plastic World, I got a $25 deal since the staff was slightly messed up. I also bought some 1/4" red acrylic scrap ($6). I laser cut the red acrylic along with some black acrylic of which there is lots here at the lab, and made the staff crown by epoxying the layers together. I then bought a glass ball with air-bubbles trapped inside to form the peak of the staff. To illuminate the staff I bought 2 1-watt white LEDs and 2 super-bright RGBs (common anode). I also had a red laser diode on hand. I wired all this up to an older North Paw board, putting the LEDs on the ribbon cable where the motors would normally be. I also wired in an accelerometer, a mercury tilt switch, and a polar heart-rate receiver chip. All this electronic fits into the crown along with 2 LiPo batteries. I programmed three modes: color cycle (switch through the 6 possible colors + white at once / second), accelerometer (make the color change according to how tilted the staff is), and heart-beat (make the whole staff flash in time with my heart). In the first two modes I also caused the laser to flash into the glass ball, so no matter what the mode is my heart-beat is visible. You switch between modes by rapidly moving the staff up and down, which triggers the mercury tilt switch. The staff then flashes three times to indicate mode-change, and the next mode takes over. I had to learn quite a bit of new arduino stuff to make it all go.

The overall effect of the staff is epic - in a darker room the whole length glows almost supernaturally! Tons and tons of people told me how cool it was, and they were mostly astonished to learn that I had made it, not bought it. Honestly I've never seen anything like it for sale anywhere, so I don't know where you would buy it! I hadn't considered commercializing it, but it wouldn't be too hard to offer a small circuit which would allow easy illumination of acrylic staffs.

I completed the costume with my burning man "wizard jacket" (it has purple leopard-print fur) and a pair of blue-sparkle wrap pants that my old housemate gave to me. Someone actually told me that I should call myself a "pimp wizard". Lots of people asked me what I was supposed to be, but understood my wizard answer immediately - still, I think if I use the staff again I'd go with a greatcoat and white beard, that's much more wizard-like.

Last night was the first ever Quantified Self Toronto meetup. I presented on my new "Heart Flasher" project of monitoring my heart-beat, flashing it with LEDs to those around me, and logging it. Others presented on everything from posting a photo everyday for family and friends to see to trying to solve night cramps, to living your life inside emacs (her notes of this events are epic, but of course do not include her own talk!). I perhaps need to change the logo of this site to her little drawing of me, it's super cute! And of course Alex talked about her wonderful CureTogether website. I met several really cool people and overall the event was a smashing success, we're going to do it again soon! 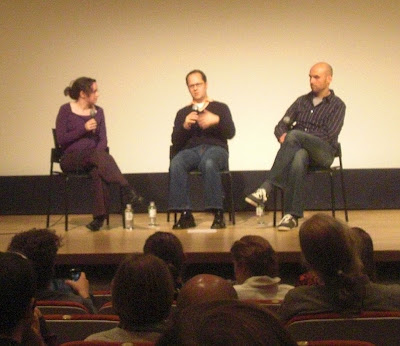 Last night I went to the screening of Transcendent Man at the Planet In Focus environmental film festival (why it featured there is a little difficult to understand? But as Mr. Sustainable Transhumanism, I'm glad it did, maybe that shows progress?) It drew a pretty good crowd, I estimated the theatre was about 60% full, ~250 people, about 75% male (yes, 3-to-1). I have no idea how this compared to other films in the festival. I went with a large contingent from the hacklab.to. Anyway, the film was actually mostly about Ray Kurzweil himself, rather than his ideas. A lot of time was spent talking about his father, a musician who died fairly young from a heart condition. Apparently Kurzweil hopes to "bring him back" with AI, and in the service of doing so has been collecting everything there is to collect about his father. I think the film makers see in his father a motivation for Kurzweil to keep on about the Singularity. But I think his personal desire to not die is a far stronger motivation! (that's why he's written 3 books about longevity) I think the best moment in the film for me was very early, talking about Kurzweil's childhood, and they showed a sketch Kurzweil made of a "homework machine" he wanted to build. That's his inventor-mind at work even as a small child :-)

There was a panel discussion afterward, although it was a little truncated because the film started late. The panel featured Madeline Ashby (science fiction writer), George Dvorsky (futurist and ethicist) and Greg Van Alstyne (design educator). Honestly my impression was that only George actually knew anything about the topics being discussed - and he knew everything. Madeline did manage to ask some good questions though.

I was also confused about the film, because I was expecting a different film. Turns out, Kurzweil himself is making a film (actually it seems to already have premiered?) called The Singularity is Near: a true story about the future. I knew of this film because Kurzweil talked about it at the 2009 Singularity Summit at length.

While on the topic of the Singularity, I also feel a compulsive need to tell you about Harry Potter and the Methods of Rationality, a Harry Potter fanfic written by Eliezer Yudkowsky, the founder of the Singularity Institute for Artificial Intelligence. After Kurzweil, he's probably the best known Singularity proponent (although interestingly enough, he doesn't feature in Transcendent Man). Anyway, the story is excellent, and it starts when Harry's adopted mom marries a scientist instead of the dreadful Vernon Dursley. Harry grows up as a rationalist, and the existence of Magic screams out as a puzzle to be solved in order to Rule The World. Prepare to loose days of your life :-).

I spent a little bit of time sprucing up my blog. I imported all 12 of the entries from my old "meta civilization" blog, which is now defunct, you'll find those in the archives. I added some links on the left hand side, plus I dug up the old Digital Crusader logo that Alex Weldon made for me oh so many years ago (back in the original incarnation of digitalcrusader.ca, when it was strictly a transhumanist news blog). Plus I spruced up all the meta data. The bits are once again coming for your brain :-) Last weekend was SoOnCon 2010, the Southern Ontario Hackerspaces Conference. People gathered from Diyode (Guelph), Hacklab.TO (Toronto) (most of our contingent is pictured to the right), Kwartzlab (Kitchener), Site 3 (Toronto), and ThinkHaus (Hamilton) for a weekend of fun and education. We hacked badges, talked to each other, had a talks, and generally shared our knowledge. I especially enjoyed the keynote by Kate Hartman, who has done so much with soft circuits and wearables. The Tamagotchi talk by Natalie was also exceptional - turns out reverse engineering those little toys is a lot of fun and allows some great hacks to happen :-). My talk was well received as well, I got lots of questions and hopefully have inspired a couple more people to think about wearable electronic senses as in the realm of possible, even at hobbyist level. SoOnCon 2010 Flickr Set.

The flickr set also includes some shots of the recent Toronto Wearables Meetup #5 featuring Sean Montgomery. He gave an excellent talk, including demo of all four of his cool wearable biometric thingies. I was most impressed by the EEG hat, which actually does give you some insight into what's going on in his brain. Basically, it monitors two areas of his brain (visual cortex and frontal lobe) and red means higher activity than normal, green average, and blue below average. You can really see it working too. It's kind of embarrassing for him when the hat goes blue while people are asking him a question though :-). Anyway, awesome! After the reunion I continued on up the freeway to Montreal. I crashed with an old friend there, played huge numbers of games (he's a board gaming geek), and checked out Foulab, the Montreal hackerspace. They've got an awesome space, perhaps 2,000 sq.ft, and it's seen a decent amount of love. They have a bit of a junk problem (lots of donations of things that are actually worthless), so I talked to them about some solutions to that problem that I've seen. There is also a fair number of pretty awesome hacks in the space, including the teletype machine that spits out tweets (!), a very cool very large POV machine, the coconut-head roving robot, the sweet coffee-can lamps over the big desk, a hot-wire cutter (it made the pictured object, though I have no idea how...), a solid ink printer that they use to make flexible PCBs (!), and some sweet tool organization. Apparently they only have about 20 paying members, but I'd say they are still one of the most active hackerspaces I've visited. Keep up the good work, foulab! Foulab Flickr Set.

Also, I purchased an ungodly number of Montreal-style bagels (at REAL Bagel), enough to last for several weeks, then my bagel-depression will have to set in again :-(. It's just not the same anywhere else in the world... Last weekend I traveled up to Kingston for "faux-coming", the annual reunion event that Queens University is now canceling thanks to riots in previous years. Canceled or no there was still a huge number of people who returned, and a lot of parties. I had fun hanging out with some old friends and catching up. I toured the campus too and checked out some old haunts like the Mech Eng building, the math building, the library, Queens Pub, etc. It's surprising how little most of it has changed! There are a couple of awesome new buildings on campus though, and Clark Hall Pub is nearly unrecognizable on the inside (new management by the the commies! horror!). I also attended the football game, I think only the second time I've ever done that. Queens lost, but it was a good game, we were in the lead up until a few minutes before the end, and then the game went into overtime. Queens Sci'00 Reunion Flickr Set.