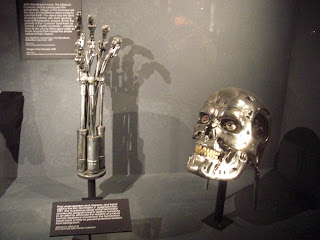 I spent the morning of the 1st driving to Seattle. About 2 hours into it I realized that I had left my luggage back in Portland! Fortunately, thanks to my Portland host Lynn and the (slightly sketchy) magic of craigslist, I managed to get my luggage delivered to Seattle without turning back myself. Thanks go to mysterious stranger "Michelle", who received one enormous hug from me :-). Also, I owe Lynn one for making it all happen on the Portland end.

Anyway, that crisis dealt with, I proceed to meet Jen and we went to the Museum of Science Fiction, which is unexplainably joined at the hip with something called the "Experience Music Project", hence the name "EMP-SFM. Flickr set. What these two have in common is anyone's guess?!? Anyway, the museum was awesome, they have many of the original props used on shows/movies like Star Trek, Lost in Space, Star Wars, Blade Runner, Planet of the Apes, etc. And, they have many many awesome sci-fi books with commentary on display. There are so many excellent books that I have not read!!! One of the startling things is how poorly made many of the props are - I guess the truth is that on-screen, you just can't tell, and so there is no point making things well. People will believe anyway!

After that, we played some pinball, got a view of the city without paying $15 for the space needle, and then I met up with my first host here in Seattle, Willow. We went and saw an Art Walk at a local workshop building, 5 stories of artwork on display in the workshops where they are created. Awesome, but a little overwhelming, I only managed to tour 4 of the floors… I totally neglected to take any photos of this, sorry!

Comments:
oh, forgot to tell you!: when michelle showed up to get your bag, she said i looked familiar and we figured out she was a customer at my bar. small world... and made me feel slightly less 'sketched out' about the whole thing.

"What these two have in common is anyone's guess?!?"