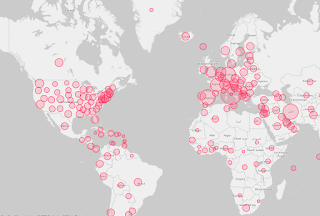 First, some resources:
Nice tracking for Canada (with charts and data downloads): Covid19Canada (by some UoT people)
Global Tracking: Coronavirus.app
Handy Tool for projecting the future: Epidemic Model
USA: CDC test tracking (I don't know WHY that page is missing so much data even though they keep updating it, but it's the best info I've been able to find).

Second, some local updates: As expected, the Canada-USA border has been tightened again, by mutual consent, it's closed to American's now, which is great. I kinda figured the delay was political (the USA wouldn't agree to not letting American's cross), so it's great to have them aboard for this, and within two days of the original announcement.  Toronto numbers on Monday were scary, with 20 new cases in Toronto, some of them community spread cases, but numbers yesterday were *amazingly low* at 8 (I would have bet money on 40+), so that's great.  We're basically tracking with my previous hopes for where we'd be at locally, I still think it's possible for Ontario to keep it to low thousands of cases.  Try plugging some values into that model I linked above, it's very informative.  A sort of "middle of the road" scenario where you assume that Ontario had 200 community cases before we locked down shows that we end with only 62 fatalities, and need only 240 hospital beds, which is obviously bad, but it sounds manageable to me.

Now on with the main event.

Near-term US Futures (next 2 weeks): Many US states will become like France, Italy and Germany: overwhelmed health care systems and thousands or tens of thousands of patients. This is already inevitable based even on the confirmed cases. Given that the testing in the USA has been embarrassingly bad, their true cases are *much* higher than reported.  Honestly my "best case" scenario for the USA at this point is 1M cases, and 50k deaths; that's going to start in the next few weeks in places like NYC & Seattle. New York, with thousands of confirmed cases, still is not properly locked down even today; they will soon have hundreds of deaths every day. The miracle they need: everyone in the county to go into immediate, total lockdown. Nobody even leaves the house for a week, and they try to avoid infecting each other in the household as well. Since that's obviously not going to happen, they face a much longer isolation period than e.g. China has faced - and to be clear, they locked down Jan 23/24 and most cities are STILL in lockdown now, almost 8 weeks later. Trump keeps talking about 15 days to slow the spread, but that's an atrocious, misleading, horrible lie about the true reality of this situation. The American political response at all levels has been abysmal, and is likely to continue to be so (let's not even talk about the mayor of NYC and his actions...).  Americans: please please please lock yourselves down if you live in the USA.

Near Term Globally, obviously it's as bad in Europe, they are perhaps 3-5 days ahead of America in general, but facing a very similar scenarios. Their political responses have also not been very good; with some such as the UK and the Netherlands actually announcing plans which essentially call for the deaths of 1-5% of their own citizens. Craziness!!!  Now the UK has actually retreated from that plan, but the bonkersness of it really blew my mind.

The rest of the world appears to be several weeks behind in terms of infection counts, but it's so hard to know if the numbers of confirmed cases is telling a true story.  To be sure, you need to know about the state of testing in each country, and I haven't had time to do much digging for anywhere but Canada and the USA. So I won't comment more broadly here, other than to say: if you are detected ANY community cases (meaning: you can't trace a confirmed case back to travel or a close connection) then the time to lockdown was YESTERDAY.  Every delay of 1 day causes 40% more cases, and potentially more than that in deaths if you go far enough to overload your medical system.

Medium Term (months) Futures: well, we have EXCELLENT NEWS from France today: Sanofi offers potential drug to beat COVID-19. They say "In a recent clinical trial, the Plaquenil drug was tested on 24 patients, and after six days, the virus had disappeared in three quarters of them".  Now that isn't actually very encouraging by itself, since actually most people recover from the disease pretty quickly anyway. But there is additional info in a (french) video: Coronavirus: “promising” chloroquine clinical trials in Marseille, government announces larger trials where they reveal that they had a control group of 24 other people, and after the same 6 days all 24 of them still tested positive.  Meaning: the drug helps to rapidly reduce viral drug load in peoples bodies. From what I understand of what causes people to die (an immune system freakout due to super high viral overload), this drug is probably a great treatment, based on these results!  And better, the drug is already used for several different things, so it seems likely that lots of countries have at least some small stockpiles of it. Assuming more can be manufactured quickly, it could radically change the OUTCOMES of the infections we already have underway, and thus save a lot of lives. And medium term, it makes a real difference in how our future looks, if it proves out with e.g. older people, and reduces mortality to e.g. flu levels or below, it's actually BETTER than a vaccine. So that's super hopeful, the first good break we've gotten in awhile on this problem.

In terms of a plausible medium term future in the USA, I sort of gave it above, but you can imagine that drug helping, and I hope that they get it together nationally and start lockdown properly everywhere. Assuming that happens, they can keep it to 1M infected and 50k dead, less if they have enough of the drug to treat large numbers of people.  If they don't get things under lockdown, well, just keep multiplying. Here's your catch phrase: a global pandemic is a mandatory exam in national competence, and America has been failing so far.

Long Term: well, that miracle drug has greatly improved my long-term outlook. Obviously it may not work, but it's increased my confidence that such treatments will be discovered / will work. So a different 3+ year scenario than last time: we rapidly scale up manufacturing of whatever drug works. There is a widespread distribution scheme, where basically every household ends up with enough pills to treat a couple of people for the full length of treatment; these pills come with instructions on when and how to take them, and ideally with a home test for the drug too.  Then, life can sort of go back to normal, except that everyone may occasionally have to check themselves (basically when you get a suspicious set of symptoms, cold like: fever, cough, but no sneezing) and enter a brief period of treatment and isolation if they test positive. Retirement homes and similar places will need to be super vigilant. But life in general could be "fairly normal" I think, there is just going to be a wide spread level of paranoia about the common cold that doesn't happen now, and in general there will be a huge increase in public spending on public health resources, pandemic fighting, etc (hopefully that boost actually lasts long enough to be helpful for the next potential pandemic, which is probably 5-20 years away).  So that's much more normal than my previous long-term prediction, reflecting the optimism I have gained from that reported successful treatment.