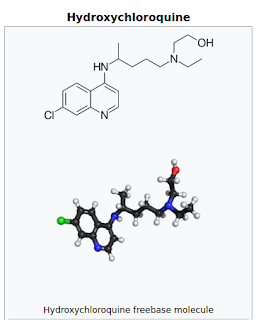 I found the (draft) scientific paper for the french Hydroxychloroquine and azithromycin treatment, and it's amazing! Results are even better than the previous announced "75% tested negative after 6 days" result. There was a 6-patient subgroup which also received the antibiotic azithromycin, and they had a 100% negative test result.  Obviously that's a tiny sample, but it's super promissing.  The FDA already approved it and several groups are doing larger studies, so it's conceivable that in just a few more days we could start to widely use this drug combo on the most ill & most elderly patients, and save thousands of lives. We don't deserve this miracle (what are the odds that an existing widely used drug would just happen to be so effective against a new disease?!?), but we might get it anyway, and that's just amazing. Thanks science, and thanks to the people in China who identified this drugs action in-vitro, and the team in France who did this study. You're all heroes if this pans out.  Note that what I write about deaths below still assumes this kind of miracle doesn't happen. We might be able to save most of them yet, and obviously an effective treatment means it's less scary to let the disease propagate a little bit (but we can't let it go wild since we certainly don't have enough drug to treat EVERYONE).

In local news, Ontario and Toronto are progressing along the epidemic at about the rate that seemed likely to me when I wrote first email. Ontario is still on track for low-thousands of cases with a dozen or two death total. In the last three days (March 17, 18, 19), the province reported 22, 44 and 36 new cases, total now 251 with 2 deaths. Toronto: 20, 7, and 18, total now 128 and zero deaths, 11 people hospitalized, 4 in intensive care.  So MUCH depends on the testing coverage, i.e. are we actually catching/testing most (>50%?) of the actual cases, or is there widespread untested infection? If you assume that our testing IS good (it's been pretty good to date, as proven by the fact that our epidemic is later than most places and surprisingly late for how well connected internationally Toronto is, and by the fact that deaths are in-line with 1% of infections), then these only slowly rising numbers are very positive sign that we'll get away in the end with low-thousands of total cases. To actually get there though, we NEED TO STAY in lockdown at least as strong as we are now ("extreme social distancing" and widespread business closures/limitations), and our public health teams need to continue to find and isolate infected people at high efficiency.

The city of Toronto is actually doing daily media briefings, and they are *incredible*.  I am so impressed with Dr. Eileen de Villa, she is calm, well rested, super clear in her communications, and she gives full, accurate, and true answers to every question.  She doesn't hide her ignorance when doesn't know, and she explains why we do things even in our state of uncertainty about how the virus works. She mixes in both carrots and sticks to encourage people to behave responsibly. It's worth going back and watching some from the previous days if you have questions or curiosity about public health and how and why things are done. If, when this is all over and Toronto has escaped any serious death toll, it will be her and her team at the city that we owe thanks to. I'm already grateful: thank you Dr. Eileen de Villa. Plus, she breaks me up and makes me cry with her statements about how we all love this city, you can feel the love.

In my optimistic vision of how this is going to go for Toronto/Ontario now, we basically stay where we are now in term of lockdown till April 5th (as opposed to being forced to implement stronger measures due to ever higher numbers of infections). Total cases could be something like 1000-2000, with perhaps a dozen or two deaths (though half of those deaths probably haven't happened by April 5th). At that time, if there haven't been any new community cases in a few days (ideally at least a week!), we could potentially allow things to go back to more normal business-as-usual, opening school and business, etc. The MOST IMPORTANT part of a program to allow opening up would be for all citizens to be hyper vigilant about symptoms, confining themselves immediately if they feel even the tiniest bit sick, and also informing anyone else around themselves who were close enough to catch it to do the same. Because obviously if that doesn't happen, we get back to needing city or province wide social distancing again in less than two weeks; this whole cycle would have to repeat. I guess we might be able to do such lockdowns more regionally, if we were certain of the patient zero and their travels in each area, but man it seems hard to be certain like that... perhaps one part of opening up might be some regional travel restrictions, basically, telling people to limit travel outside of their own region? That doesn't seem super practical, but I guess it's more practical than what we're doing NOW, so there's that... The possible drug treatment above also helps us to be ok staying more open, since we can tolerate a few more cases because the risk is lower - though as I said above, we still can't let the virus run rampant, so if cases rose too much (>5/day?), especially if they were public transmission cases (i.e. not linked to an existing known positive case), we'd still have to lock down again.

In conclusion, stay home, distance yourself greater than two meters from others on required trips out, and stay healthy. We're going to get through this together.