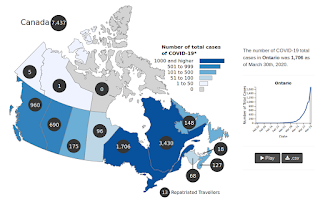 So lots has happened since I last wrote about the situation 5 days ago. Ontario has managed to ramp testing up to ~6000/day (from ~2000/day), and the backlog of testing has basically been eliminated. Presumably we are now able to start testing some of those people who were not being tested before because their test results wouldn't change the actions we take, e.g. returning travelers (I've personally heard reports that such people were not being tested). I'm still keeping track of Ontario, Toronto, Canada, California and New York in a spreadsheet.  Pictured is the super fancy new interactive map of Canada that's on the Canada covid page as of two days ago, you can actually "play" it to see cases rise over time, which is pretty cool.

Today's disturbing Ontario numbers - 380 new cases - have to be understood in the 'more testing' context, obviously wider testing is going to uncover newer/more cases. What's ALARMING about the number isn't so much the size, as the fact that the test positive rate was so high: 5.84% versus a previous level of around 4%. Obviously the population being newly tested is somehow higher risk than the populations we've been testing to date, which I think does make a little bit of sense for returning travelers who were expressing symptoms. In fact it's kind of surprisingly those wouldn't be even higher. But that's just one possible group of people who might be getting tested now, and honestly, all of this is mere speculation. The reality is that increased testing is going to show increased cases, and this is likely to continue until nearly all symptomatic, historical (meaning: we were alerted to them, but didn't do a test because they were scarce) cases are confirmed. I estimate that'll take many days to work through those kind of cases, so I expect to see Ontario numbers remain at this elevated level for awhile, perhaps a week, plus or minus a week? So hard to know, it sucks that Ontario has never reported presumptive positives / probable cases.

Once we've worked though that backlog of untested cases, presumably we'll get back to data were we can try to understand the continuing community transmission again. I imagine Ontario Public Health itself is tracking community spread vs close contact vs travel related cases, but they are no longer making that info public (and even before today's change in their reporting, we'd only get that data for about half of cases). In the mean time it's going to be quite difficult for us to tell if Ontario's shutdown measures are actually working - we were expecting that this week the percentage growth numbers would finally start trending down, but that will now be masked by the testing boost, so without seeing the breakout, it's going to be hard to tell.

Anyway, I've also been reading a lot more about what the future will be like, and I found this amazing essay on Medium: Coronavirus: the hammer and the dance, which goes into huge amounts of detail about why we're suppressing rather than just distancing or doing nothing. Long abouts the 3/4 mark, it actually gets into "the dance", which is the phase where we open back up, but selectively, letting some kinds of activities happen, doing a lot testing and isolating, and generally trying to keep R0 less than 1. Because we have to keep it contained, sub exponential, since hospitals cannot hope to treat epidemics - even the small scale epidemic we're facing now is going to be a considerable challenge for the health care system, though I continue to predict that we'll be under the capacity here, do to our fairly quick action. Anyway, please go read the essay in full, I'll wait, I promise it's worth it. 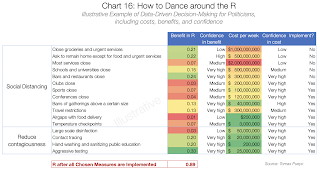 Probably the most interesting thing in the whole essay is Chart 16 (click on it here for a bigger version), which is FAKE, i.e. those numbers are all made up as an illustrative example. But we can hope eventually to have real numbers for it, and to use something like that to decide what's possible to open up and what's not once we're in the dance phase.

Summing up my thoughts for Ontario Coronavirus Futures:
So overall that's a kind of depressing "new reality" that we'll be living in, of uncertain duration, but it's hard to imagine how it could be any different, short of some kind of miracle cure or something.