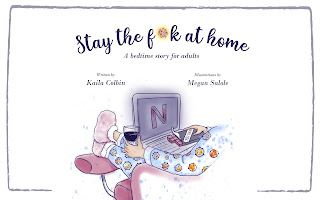 I'll get to the long term thoughts, a few brief updates and interesting data things first:

Updates) Ontario numbers have been higher than I was hoping they would be, so I'm revising my estimate upwards again from 3-5k to 8-12k. In this wave, i.e. till about June 1st. The numbers in the last two days have been encouraging in terms of being flat in number of new cases - hopefully this shows that our measures are working, and we can now expect a few more days of flat before we start to see a slow decline.  Obviously if they don't stay flat, my projection above is once again garbage. Ontario itself released models, which was super fascinating. Watch the April 3rd news conference. I agree with almost everything that was said, and I applaud Ontario for being brave enough to release the "sobering" projections. It's especially great to hear that their prediction show us having enough surge capacity in the health care system to meet the expected number of ICU/ventilators needed. The only thing I really don't understand is the projection for 3000-12000 deaths in the next 18 months (slide 13). They say they are hoping to keep the current wave to 200-1600 deaths (slide 12) depending on new measures we take soon. So obviously they feel that there will be somewhere between 1400-11400 deaths AFTER this first wave, clearly implying that they expect at least one more wave which is more serious / less contained than this wave. But surely that is preventable now? Are they instead thinking there will be a slow but steady level of infection which results in steady deaths? I ran some numbers for that, and it's 5+/day for the 18 months, which implies at least 200 new infections every day over that period - at that level we need to lockdown, so I don't understand how we can possibly get to that 3k-12k number. My suspicion is that it's designed mostly to make us know the importance of obeying all these measures, which IS a good reason. We all do need to be scared, and we all do need to stay the fuck at home (a bedtime story for adults, cover image shown above). Maybe I'm missing some third pathway though, where we can have that many deaths without either another epidemic or a steady level of infection which I think would lead immediately to an epidemic?

Data Things) Some cool links: Covid-19 Consumer Impact Tracker shows a lot of interesting charts about what's hot (DIY haircut up 221%) and what not (heels down 35%).  Google released some fascinating COVID-19 Community Mobility Reports where you can see how much travel behavior has changed in pretty much all countries of the world (with the curious exception of China!). Ontario is much less locked down than e.g. Italy, but more so than California, and at about the same levels as B.C., which is several days ahead of us and clearly showing that they have it under control now, so that's quite heartening. The wikipedia entry for 2020 coronavirus pandemic in South Korea is also amazing, so much detail and charts. That's case tracking done right.

Economics & Long Term Thoughts) Some links to good reading: Cities after coronavirus: how Covid-19 could radically alter urban life. The coronavirus: A geopolitical earthquake. Social Distancing During the Black Death. Ted Chiang Explains the Disaster Novel We All Suddenly Live In. The Covid-19 crisis is a chance to do capitalism differently. Obviously there are TONS of this kind of story out there, and I've read at least four for every one that I linked here. I mostly haven't linked all the ones talking about V vs U shaped recoveries, etc.

I guess the first thing that I'd like to say is that this event is of massive historical significance. It's going to leave wounds, and cause changes, to a much greater degree than anything in recent decades - I think it'll end up being at least as significant globally as World War II, and possibly even more so. WWII really reset how generations of people thought about how we should structure society, and ushered in things like the welfare state, the Marshall Plan, and of course, the United Nations. It'd be very surprising to me if long term, this COVID-19 crisis doesn't create similar levels of geopolitical change. Here's a few obvious changes for the first decade, though of course, caveat emptor, these are all my opinions: