Most regions in Ontario outside of the GTA are moving into Stage II opening! I've read it over in detail and I'm pretty happy with it from a policy perspective. Probably the most interesting bit is that restaurants and bars still can't have any indoor service - but they are allowed to do outdoor service, e.g. on improvised patios, etc. Plus delivery & takeout. Will that make it economical for them to actually open? Hard to say, perhaps...

Anyway, I'm glad it's finally happening.  After the Phase I opening, we had a LONG period of flat or even slightly increasing numbers of daily new confirmed cases, which was alarming. I've read some great stories recently about successes with the Contact Tracing in Ontario, which is awesome, we need to hunt down and eliminate this virus, and that's how it gets done: springing wide-spread testing on whole buildings where you know there was a case, to catch anyone else who might be infected, before it spreads further. Great article: Coronavirus: How to Do Testing and Contact Tracing. Also this one: Social Distancing Is Not Enough which is about how we will ever feel safe inside, and has some amazing floorplan of infection from various contact tracing teams in South Korea and China, very informative! 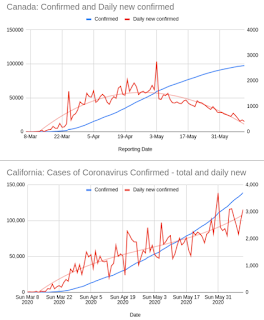 In bad covid-19 news elsewhere, it seems many places outside of Canada (which is doing quite well) are NOT doing very well. Closest to me would be California, where I used to live. See chart to the right (click for bigger version), or my spreadsheet. Apparently northern California (San Francisco, San Jose, silicon valley, etc) is doing sort of OK, but southern California is really fucking it up, so much so that the state as a whole has seen steadily rising new daily confirmed cases, to an alarming level of almost 3000 per day now. And yet, like a lot of places in the USA, they are talking about opening up. Which obviously just means MORE cases. It looks more and more like Canada and the USA are going to really diverge from here - USA has had about 2x the cases per capita that Canada has, so e.g. California had been a good "sister country" to Canada, in terms of having a sort of similar epidemic profile. But that's NOT true anymore, Canada is way down from peak, to like 500/day (from 1500), whereas California still sets new highs on a regular basis. Pretty clearly the Canada-USA border is going to have to remain closed, and Canada is going to be able to open up internally risk free (we'll be like Australia), whereas the epidemic and the deaths are going to continue in most of the USA. Why have our outcomes diverged? It's hard to say, but obviously, comes down to micro-behaviours: people in the USA have continued to infect each other, not maintaining social distance. Whereas people in Canada somehow managed to avoid doing so. Our R0, the number of people each new case infected in turn, was perhaps 0.8, while China was 0.3 or so (that's why China was so much faster to reach 0 cases), and the USA is hovering around 1. 1 means new cases don't decline over time, so that 0.8 vs 1 is a huge deal, much bigger than the difference between 0.3 and 0.8 in the long term. I wish Canada (or Ontario) had locked down a little harder, so that we could have opened up sooner (most of China was out of lockdown after only 60 days, whereas we're still only at Stage II on day 87!), but compared to California, I'm feeling pretty good about our outcome...

Also, I rarely comment on this kind of stuff since I figure I'm just another well-meaning clueless rich white guy (so take this with a lot of salt, always be suspicious when somebody has no skin in the game! or worse, might even have incentives to perpetuate the status quo), but I can't stay silent this time - I really hope something like this happens: Defunding the police isn't radical. It's so lucid it's a wonder it took a movement to catch on. 90% of the things that cops get called to, it shouldn't be an officer trained to deal with violence, that's totally inappropriate. It should be a social worker, or a therapist, or a negotiator, or an addiction specialist, etc. Heck, I don't think cops should do speeding tickets or parking tickets either, there should be some other service which handles that. Really, cops should be used only for things like: murders, breaking and entering, stabbings, etc: violent crimes. I wouldn't send a cop for a rape case even, unless the perp was somehow still there - I'd send an expert on how to help the victim, who incidentally collects some evidence that gets referred to the cops (assuming the victim wants that). We perhaps need a new name/organization for the 90% of police "business" which we're hiving off here, something like "Community Support". And 911 should send that rather than cops or firemen most of the time. Obviously we can't make this change overnight, but I'd like to see it move quickly - 25% of the current police budget in the new org(s) starting next year, 50% in two, 75% in three. And we can see how much further it can go from there. I'm somewhat optimistic that many cities are actually going to at least start on this, but there are lots of reasons to be skeptical, that's for sure. I mean, we SHOULD have been doing all of this already, for decades... I also hope that police organizations are forced to dispose of all their "military" type equipment (the riot gear, the non-lethal crowd control weapons, etc), cause frankly, that's insanity, it should not be stuff they even own. Asking cops to shut-down protests should not be an allowable task in a democracy, and doing so CREATES the violence it's nominally supposed to prevent, arms-race style... Anyway this is clearly a bit of a rant, so I'll stop now...