There are a number of awesome tracking websites springing up. 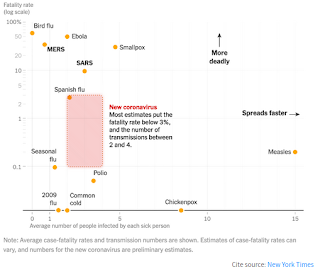 USA: COVID Tracking Project, has data from all the states apparently 57 now, so must include the districts, etc). They are taking screenshots of their data sources (since many, like Toronto and Ontario, don't bother to show a history themselves), and actually rate the data quality, which is cool.  Data only though - no chart or graphs.
USA & Canada: COVID-19 in US and Canada, they have decent charting, and if you scroll down to the middle section (about 1/2 to 3/4 of the way right now) there are several pretty awesome data animation widgets/infographics, which are really cool.
Why You Must Act Now: COVID Act Now, generates predicted hospitalization case loads given four different scenarios: no action; social distancing, shelter in place, wuhan-style lockdown. I have no idea how accurate their models are (in fact it's probably hard to know or even measure how effective "social distancing" really is), but it's super scary that they show social distancing as basically only delaying the overload of hospitals by a month or so.  Presumably Ontario/Toronto are more optimistic about the effectiveness of social-distancing, otherwise we'd be implementing more harsh control measures...

Two days ago I gave an optimistic future vision for Ontario. Today I want to lay out a more middle-of-the-road type prediction.

First a few bits of news. Tracking Spreadsheet for Ontario/Toronto.  Ontario's new cases March 19/20/21: 44, 50, 69, total now 377.  Toronto: 18/33/32, total now 193.  Ontario increasingly has a massive testing backlog (meaning: samples which have been taken from patients, but are waiting to actually go through test procedures to get a results. The backlog is 7239, and daily test quantity is typically about 1-2k, so we have at least a 3 day backlog now. There are conflicting reports about whether testing will increase or decrease over the next week or so - some say we're having serious shortages of reagents and staff fatigue, while others claim we have new labs ramping up and will get to 5000 test/day soon. Apparently the source of a lot of those backlogged tests is returning travelers, which is terrifying to contemplate - imagine returning to Ontario, being told to self-isolate, but actually not knowing for sure if you have it. Do you take it seriously? Is there even any food in your house, since you just got back? Lots of ways I can imagine those people spreading the disease in the time between sample taking and them actually getting the positive result...

Today's numbers in Ontario are already a bit scary, that's for sure. It's also true though that there is a considerable lag between when measures are put in place and when you can expect to see the difference in the test results:  because of the lag in the testing itself, but also because of course people don't even know to get tested until they have symptoms. Realistically that total lag is 5+ days.  So today's numbers are infections that actually happened at least 5 days ago, and we can expect to see numbers continue to rise for AT LEAST a few more days, since Ontario didn't lock down effectively until Tuesday (3 days ago) or so...

We HAVE acted quickly, but my impression so far is that we're not acting strongly, i.e. the state of our "lockdown" isn't very severe compared to what's possible.  According to the model I've been using (http://gabgoh.github.io/COVID/index.html) we need to get under 40% of the previous infection rate, and ideally less than 25% or so, in order to keep this epidemic well under control (feel free to play with the sliders yourself[1]). Do you think existing measures will result in less than 25% of the previous infection rate? It does seem plausible, but I just don't understand infection dynamics enough to be actually confident.

Anyway, what does it all add up to? Here's my best guess of a 'realistic' scenario for Ontario. We've already gone through week one, so here's the scenario from here:

1) Week Two: we keep moving forward on stricter social distancing and hygiene measures, getting our "lockdown" better - better measures at supermarkets, more people taking it seriously, better compliance of non-essential businesses, etc. Our testing rate hopefully scales a bit, and the return of travelers from abroad slows down (most everyone is back), so our testing lag will hopefully only grow for the next day or two, and then start reducing again. The number of new cases rises for the first few days, and then plateaus, between 100 to 150 (Ontario).

2) Week Three: we reach April 5th, and number of new cases/day starts slowly falling, but we're still recording many new cases, way too many to contemplate reducing our control measures. So, the government announces the extension the social distancing period for 3 more weeks, to April 26th (plus or minus a week). Sadly, people are going somewhat crazy from being cooped up so long, and so our previously tightening measures are loosening a bit, but we probably still have levels similar in effectiveness to the week one average. The economic effects of this are crushing for many families, but government money is flowing, so hopefully we can avoid wide-spread despair or poverty. Hospitals have a lot of patients, but we ARE under their total capacity, and this week sees the hospitalized patient population hitting the top of it's curve. Several treatments (like the hydroxychloroquine) potentially prevent at least some of the deaths from occurring.

3) Weeks Four & Five: number of new cases is still falling, though not as fast as everyone is hoping, we reach ~10 by the end of week five. There may be announcement of further, harsher measures, for instance, the closure of parks and public transit, though this obviously results in it's own whole world of compensatory behaviors which increase spreading almost as much as the cancellation reduces spreading. We're all more than a little tired of being co-oped up, especially parents of small children, but it IS widely understood how important obeying these measures is, so we're just "suffering in place". Testing has ramped and we're on top of new cases, etc, the disease itself is increasing under very good control.

4) Week Six: we record several days of only low single-digit new infections.The government lays out a plan for us emerging from our lockdown that consists of everyone being hyper vigilant about symptoms and self-isolation if they are sick, some continuing social distancing, being prepared for more regional lockdowns, and crazy levels of testing. Many people (e.g. TTC drivers, grocery store clerks, etc) will have to wear significant personal protective equipment for the forseeable future. But we DO go ahead with opening back up at the end of week six. There are several treatments now actually available as well which also encourages us to take this risk - the chance that people will die if they get sick is considerably smaller than before.

5) Weeks Seven-??: measures work in most places, though a couple of cities DO end up have to restart more extreme measures when they have a "super spreader" situation happen.  Flights to some countries which also have the disease well under control start to be more popular again.  The economy starts to recover. Things like restaurants are slow to get back to their former levels of business, but it does happen as people's fear recedes.

6) Eventually (at least 4 months from now): Canada is able to reopen it's borders. The economy is back to being mostly regular. Treatments are great and widely available - perhaps even enough for "everyone" to get treated.  We can let the virus actually infect the entire population, and we basically do, though perhaps it's staged and controlled somehow. The virus and disease become endemic, and various mutations of it are a seasonal disease that people can get, just like the flu, and probably roughly as dangerous (which is to say: still quite horrible really).

Obviously it can easily go worse or better than that, but I feel like this is a sort of middle-of-the-road scenario that is fairly plausible.


[1] Note that the model shows "populations" of people in each group, NOT daily or cumulative totals.  So it's a bit hard to compare directly to the numbers in the spreadsheet, you sort of need to compare one days numbers to the next in the model, in order to get a feel for the rates. If someone is a super awesome hacker, I'd love to see a fork where there are three charts: the existing population one; a daily change chart, and a cumulative total chart.  The second two charts would be fixed outputs (i.e. no sliders etc on them). There could also be a table version of any of those, that might be handy.

Comments:
Some will charge an extra expense to convey your vehicle to your doorstep especially in the event that you live in remote territories. So make a point to get the total expense in advance in the statement before marking. tracking from china post

I need to to thank you for this very good read!! I definitely loved every little bit of it. I have you bookmarked to check out new things you post… localizacion satelital