Paintings on Canvas: Outbreak & The Return 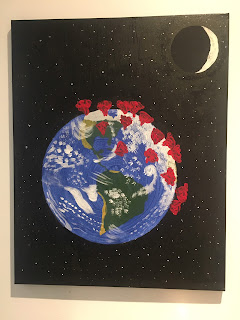 After my last two attempts, I decided that I've become skilled enough to stop painting on art paper, and move to actual canvas. I have a total of six canvasses (and plan to give at least one to a housemate too), so these things are precious! I've completed two, and I have plans now for a third.  Click images for a larger version.

First painting: I call it "Outbreak", it's the planet Earth, with a coronavirus infection! My layering idea (paint the background first, etc) worked really well here. Overall I'm super happy with the painting, it totally conveys the sort of emotional tone that I was going for, and my artistic choices (making the landmasses bigger than they really are, making a crescent moon even though that's not physically possible if the Earth is fully illuminated) I think worked well. 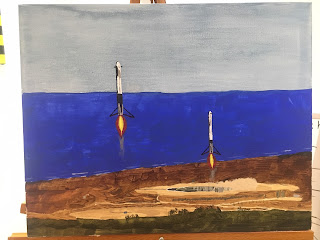 Second painting: I called it "The Return", it's the famous dual-booster landing from the first SpaceX Falcon Heavy Launch: Feb 6th, 2018. I'm super happy with how well the trees in the foreground worked, and the flames (which I was super worried about!), but the boosters themselves are a bit underwhelming. The framing is correct though - I'm totally glad that I added way more sky than the source image had, in order to get the 'rule of thirds' working. Probably the most disappointing bit of the painting though is the water; I actually repainted the entire water after the first very bad take, but even this second attempt is still not very good. All the "texture" waves that I tried to add really can't be seen, and it ends up looking more like a wall of blue than like the ocean. But I decided not to do a third attempt on the same canvas, it's clear to me that I don't know how to make it look like an actual ocean yet, so probably need to do a study or something. Anyway, overall, I think this one was decent, but it lacks the punch of the first painting, that's for sure.

I love reading your blog. Your blog post is unique and adds insight for me. Thank you for sharing.